Often overshadowed by the incredible richness of its Mexican neighbor, the numismatic series of each of the countries of the Central American Republic are nevertheless very interesting and rewarding to collect. We commented on the series of the Central American Republic in our previous newsletter, and will now present a general overview of the Guatemala Republican series. 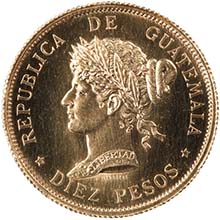 The bad news first. Quality references are few and far between, and difficult to obtain. The only attempts at a comprehensive work which encompasses the Guatemalan Republican series have been Kurt Prober’s “Historia Numismatica de Guatemala” (Spanish Edition, 1957 or 1973, still the reference!), Robinson’s The Coins of Guatemala (1964,) Holland Wallace’s fine effort “Central American Coinage since 1821” (1966, probably the most useful for the English only reader) and Siliezar’s “Catalogo-Monedas y Medallas de Proclama-Centro America y Panama- 1733 a 1976” (1976, Guatemala). The fact is most collectors now rely on the Krause catalog, which is a good starting point but fails to grasp the numerous intricacies of the series.

Following the demise of the Central American Republic, the proclamation of Guatemala as an independent Republic occurred on March 21, 1847. The event was celebrated by issuing a beautiful (and now scarce) 1847 1 Real medal. As mentioned in our past newsletter, Guatemala issued coins with the Central American Republic design until 1851. By looking at the numerous trial strikes, patterns (such as the 1851 8 Reales with the Central American Republic design), and medallic coins (such as the very rare 1852 medallic Peso issued on the inauguration as Rafael Carrera in his 2nd term as President), issued between 1851 and 1854, one can sense that the Guatemalan authorities were still finding their stride in order to achieve an independent coinage design. The “Columbus bust” design adopted in 1854, was eventually a failure as very few 8 Reales with that date were issued, resulting in what is today one of, if not the most, prized Guatemalan republican issues (KM Pn1 and Pn2). 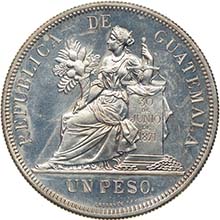 It would take the will of its strongman, Rafael Carrera (who held his post until his passing in 1865), coupled with the talent of Swiss engraver Johann Baptist Frener, to create a more definitive design for the coinage of the Independent Guatemala. Starting in 1859, Frener engraved dies for coins with the effigy of Carrera, maintaining the old Spanish Colonial system (1 Peso = 8 Reales). The denominations of coins struck range from the tiny ¼ Real up to the gold 16 Pesos (= 8 Escudos), and many rarities are to be found in these series. The 1859 cuartillo (a very rare date), the one year type 1859 2 Reales (rare in any decent grade), the 1859 R Peso, the 1864 8 Pesos and the 1863-1867 16 Pesos are all highly prized by the Guatemalan collector, and deservedly so. 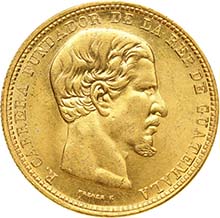 Carrera’s influence outlived his passing in 1865. Coins with his effigy were issued up to 1869, when the Decimal system was finally introduced. At that time the Onza sized 16 Pesos was converted into 20 Pesos, resulting in a interesting transitional series with the 1869 decimal gold coins being only scarce, while the 1869 gold coins of the old Colonial system are rare.

Frener’s next design for the Guatemalan coinage was to be even longer lasting. His beautiful rendition of a seated liberty on the obverse and the Guatemalan coat of arms depicting the Quetzal bird on the reverse, is still in use today. Many of the minor denominations of these silver issues are rare in high grade, a fact that has started to be more widely appreciated following the dispersion of the Whittier collection. 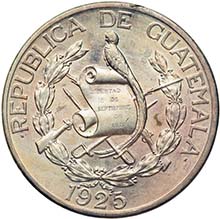 The gold coinage issued in sporadic years and in limited quantities showed various renditions of a liberty bust on the obverse with a similar coat of arms on the reverse. Many of these gold issues are very rare, and among them, the 20 Pesos issued in 1877 and 1878 stand out. Not many numismatists have had the opportunity to carefully examine coins of these dates. If you have a chance to look at one, note the carefully engraved sentence in Latin “Post tenebras lux” (After darkness comes light). Frener was celebrating his long deserved nomination as the Guatemala Mint’s Director, which finally materialized in 1878. We will not disclose its position, since this would merely take out the fun of it.

After Frener’s passing in 1892, Guatemala commissioned the engraving of dies to the
Frenchman Lagrange. The corresponding Proof and Specimen issues from these new
dies are all rarities, and closely followed Frener’s original design, in what constituted a fitting posthumous tribute to the Swiss artist. A rare Proof specimen of the silver 1894 1 Peso is currently available on our website.

Following the devaluation of the Peso at the beginning of the 20th century, Guatemala’s coinage becomes arguably less interesting. However, important issues are still to be found within the series, such as the 1925 1 Quetzal, the gold patterns of the minor silver denominations also dated 1925, the rare 1949 25 Centavos and the very rare 1919 porcelain pattern 2 Pesos made in Germany (a nice specimen of which we handled recently). 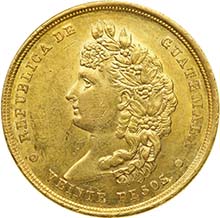 Guatemala’s coinage really offers something for everyone:

Top rarities, popular silver crowns and more. In addition, the more diligent and studious collector may still be able to outwit his competition and acquire rare and important coins for a comparably reasonable sum of money. A case in point is the 1892 cuartilla, which is a rarity not far behind its larger brother, the 1892 silver Peso (yes, the date does exist…).

Feel free to write me to comment on these or other related issues. LAN can of course assist you in building a comprehensive Guatemalan collection.