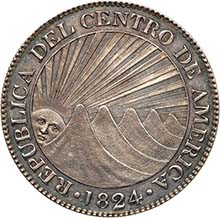 The Central American Republic, also referred to as the Central American Federation, formed by the five countries of Guatemala, Costa Rica, Nicaragua, Honduras and El Salvador, and officially established in July 1, 1823 was a failure from the political point of view, with numerous conflicts and wars undermining its stability until its final demise in 1838. However, from a numismatic point of view, it issued what it universally acknowledged as one of the most beautiful designs among 19th Century world coinage. The rendition in the obverse of a rising sun (for the silver issues) or a radiant sun (for the gold issues) over a range of five volcanoes representing the five republics mentioned previously, with a Ceiba tree representing the tree of liberty with the motto “Libre Crezca Fecundo” (Grow free and fruitful) is truly a striking one, and a joy to behold on a high grade coin. Official issues were issued by three different mints:

Since the initial master dies were all produced at the Guatemala mint for all of these three issues, they form a homogeneous and coherent group, which few people have attempted (and even fewer, naturally, have succeeded) to complete. This is a shame because this series really has it all in for a discerning collector: as mentioned before, a beautiful design, an extremely interesting background (as a witness to all the political turmoil that took place among the Central American republics after Iturbide’s Mexican empire was disintegrated), and from the purely numismatic point of view, a very rewarding yet still surprisingly affordable experience. Although some type gold coins are well recognized key rarities and expensive as such (such as the NG 8 Escudos, only minted in the years 1824 and 1825), many sleepers are still to be found in the gold series considering their true rarity versus the very reasonable prices at which collectible specimens can be obtained. While completing a date set in the gold series is probably a task impossible to accomplish, a nice type set remains within the reach of the enthusiast collector. 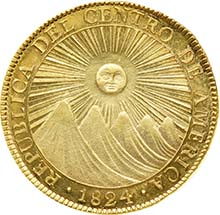 The situation in the silver series in even more tempting. For example, pleasant specimens from the 8 Reales series, although always popular, remain reasonably priced. All dates are in fact available in high grade (which is not the case for other Latin American crown series), although true MS specimens are now expensive. XF coins are relative bargains, particularly since they still show the beauty and artistry of the design. Some dates are truly elusive in or above XF and should deserve a strong premium from the date collector. The rarity of some of those scarce date/grade combinations is not acknowledged in the current catalogues and many sleepers exist within this series. In addition, high grade specimens of the minor denominations can still be picked up at low prices relative to their rarity (in general, MS minors are much more elusive than MS 8 Reales), which the market has yet to reflect. A small hoard of beautiful MS specimens of the ¼ Real was discovered a few years ago, but has not yet been absorbed by the market, and prices remain very reasonable. 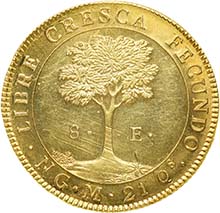 Last but not least, this series has not been plagued by modern counterfeiting to the extent of other popular ones (i. e. the Spanish Colonial or the Mexican Revolutionary series to name two). Available published information, although not complete, is sufficient for the average collector. Mintage figures exist for most of the issues, but are mostly unpublished. In addition, exact rarity relative to grade is not universally known, in particular within the MS category. A relevant piece of information that has remained unknown until now has been the identity of the NG assayers. Let us make a small contribution by finally revealing their identities: the “M” assayer initial corresponds to Miguel Muñoz, the “B” initial to his son, Benito Muñoz, and the “A” initial to Apolinario España.

Other fascinating facts, such as the overstriking of coins within the CR 8 reales series (similar to the Brazilian 960 Reis series) have not been given their true importance. Interested parties wishing to discuss this or any related topics are welcome to contact us.