An Introduction to the Coinage of Alexander The Great

An Introduction to the Coinage of Alexander The Great 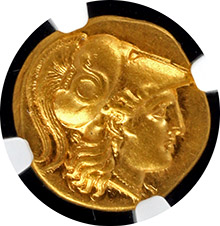 Regarded by many historians as the greatest military commander that ever lived, by the age of 32 Alexander III of Macedon had conquered and controlled most of the known world. At the time of his death in 323 B.C. his empire spanned over three continents covering approximately two million square miles incorporating parts of Asia, Africa and Europe. The coinage of Alexander is as vast and encompassing as the empire he controlled. During his lifetime, at least 25 different mints produced coinage in his name. As major cities were conquered or assimilated into his empire, those with major or strategic mints ceased production of local coinage and many began striking that in the name of Alexander. Often local coinage would be gathered from circulation, melted down and re-coined into that of Alexander’s (especially those in the name of deposed kings). His coinage saw such great circulation and was met with such acceptance that it continued to be produced and circulated for centuries after his death. In fact more mints were in operation producing coinage after he was deceased, than during his actual lifetime.

The coinage of Alexander can be considered a unified coinage of standard type, not that dissimilar from modern coinage produced in countries with multiple mints. For instance the United States produced Morgan dollars between 1878 and 1921 of a standard design. Although there are some minor characteristics in the dies, the main factor in determining where the coins were produced are the Mint Marks. Such is the case with the coins of Alexander as they contain symbols and monograms as distinguishing factors in determining their mint of manufacture.

The design elements of the coins themselves are fairly simplistic and straightforward. That being said, they carried a powerful meaning both politically and religiously. The obverse of most silver issues contained a youthful head of Herakles wearing the skin of the Nemean lion. Alexander often claimed he was the son of the god Zeus, comparing himself to the fabled Greek heroes Achilles and Herakles. Some authors have even speculated that the portrait of Herakles on the obverse is actually that of Alexander himself. The reverse of these silver issues depict Zeus seated in a throne holding an eagle and scepter. This again references to Alexander being the living son of Zeus. Although equally meaningful, the design elements of Alexander’s gold coinage differed drastically from that of the silver. With the exception of some of the fractional denominations, the obverse of the gold coinage depicts a representation of the Greek goddess Athena wearing a crested Corinthian style helmet. Although known for being the goddess of many things, the two Athena is most renowned for is the goddess of war and wisdom. Alexander was extremely intelligent and of higher education having been schooled by the Greek philosopher Aristotle. Choosing this depiction of Athena clearly held great meaning as not only was Alexander highly educated and skilled, he was undefeated on the battlefield. The reverse of these gold issues depicts Nike the winged goddess of victory holding a laurel wreath and stylis or naval standard. The depiction of Nike on Greek coinage is a frequently used motif. Often she is found crowning the victor of a chariot race with a laurel wreath on various issues. Her representation here suggests that Alexander is not only a successful general, but also a victorious naval commander. The legends found on the reverse of the coins are fairly standard with some variations in placement. Generally all coins contain the inscription “ALEXANDROU”, meaning “of Alexander”, although in some cases the title “BASILEWS” is added meaning “of King” or “Great King”.

The variety of ways one can collect the coinage of Alexander are numerous. While some collectors seek a single coin as a representative example, others collect by denomination or mint. Important and historically significant mints such as Babylon where Alexander died or Memphis where he was crowned Pharaoh of Egypt are extremely popular among collectors. Some advanced collectors even try to accomplish the task of acquiring one coin from every mint possible. Countless books, papers and monographs have been written on the subject with new discoveries and classifications being made regularly. For more information on the subject see The Coinage In The Name Of Alexander The Great And Philip Arrhidaeus by Martin J. Price, published by the British Museum and Swiss Numismatic Society 1991.